Amnesia: Because a dark scary castle is a great place to spend a Saturday

I'll admit it: I'm a scaredy-cat. I don't do horror movies or haunted houses (unless I'm working them). I jump at little sounds and still sometimes get spooked by things that go bump in the night. This is why I didn't actually play Amnesia: The Dark Descent, a first-person survival horror title from Frictional Games, for myself - I watched as a friend of mine, Alex, played. I should get credit however for not running away screaming (and helping with puzzles).

Amnesia starts you in an apparently empty castle. You can't remember anything, but you find a note addressed to you directing you to kill Alexander, who is in the Inner Sanctum. It's signed by you, so it's gotta be legit. Assuming that your previous self knew what was going on, you proceed gaily through the castle to find him. The rest of the story is disseminated through pages of your torn-up diary and, interestingly, the load screens. (There's a minimum time set to display the message, in case you're playing on a really fast computer.) They do a good job of keeping you in the dark, but informing you enough that you remain intrigued. And, yes, amnesia is a well-known crutch of writing, but they work with it quite well.
Amnesia's got a couple of interesting mechanics going for it. The main one is a balance between light and dark: enemies can see you if you're standing in the light, but standing in the darkness for too long makes you lose your sanity. You also have no weapon, so your only options when you see an enemy are to run or crouch in the darkness, praying it won't find you. Oh, and don't look at the enemies too much - you'll lose sanity. You also lose sanity by experiencing "unsettling events." Lack of sanity makes it harder to control your character and your vision will shift and warp. Eventually you just crumple to the ground in what I assume is a blubbering mess. Solving puzzles and staring at light regains sanity.

Another interesting mechanic is that doors are opened and shut with click-and-drag with an option to slam them quickly with the right mouse button. While it took Alex some getting used to at first, he tells me it was eventually pretty intuitive. It allows the player to swing a door open for a peek into the next room (which we didn't use much), but more importantly, it impedes a player who is running away flailing. Running from an enemy is that much harder when you have to remember which way a door swings and spin around quickly to slam it shut.

I didn't expect the game to be as puzzle focused as it was. Overall, I expected more enemies, but it turned out to be a good balance given the no-weapons part, and contributed well to pacing. The castle was reasonably linear without feeling like it - because you're never given a map and have to rely on limited tinderboxes and lantern oil to find your way around, it feels bigger than it is. It's also nicely impossible to get too lost or wander forward without all the tools you need. A few times we had some difficulty tracking down the last cog or pipe because Alex had a tendency to pick up and throw them around, but overall the puzzles weren't too bad. The game will generally give you a hint if you try to use an item but need something else as well. Many puzzles were fairly trivial, though - the game is relying on the horror mechanic.
I think the sounds are actually the scariest part of the game. I know many people *cough Jeremy cough* who couldn't make it five or ten minutes into the game, and it takes about ten to find the first enemy. (Though you do catch glimpses of things moving before then and frequently try to go the other way only to have the game force you to Even longer before you're in actual danger - the game uses the first encounter to teach you how to hide from them. The aesthetic is very well done overall, becoming scarier as you descend deeper into the castle and uncover the more gruesome parts of the tale.

The sanity mechanic worked reasonably well, though both sanity and health are described on your inventory screen with a series of descriptors rather than any numerical scale. While this was a reasonable choice for the game, it was a little frustrating for seasoned gamers who wanted to make sense of it. Sanity, for instance, ranges from "Crystal clear" to "..." with descriptors in between like "A slight headache." This system didn't seem to correspond with the aforementioned warping of the screen, though. I suppose it is somewhat appropriate that we spent the game not understanding the insanity scale.

As far as enemies go, while there were less encounters than I expected, the various encounters were well designed. There was never a time we felt that getting by was impossible, though many were close calls of slamming doors behind us and crouching in a corner as the creature pounded at the door. A few times we got by because an enemy simply didn't spawn, though we're unsure whether that was a glitch or the game pitying us. When something kills you, the screen will bring up a message, which is generally something like "You must carry on..." but ocasionally explains a new enemy trick for you (like the helpful "Run!"). While it was clear after dying once what needed to be done, it was a little odd to have to die to get it. I suppose an observant player could figure it out in most cases, and luckily death didn't set you back too far. The pacing was mostly good, with high points and lulls, even if it got a little predictable. We still got spooked though, to the game's credit.
Overall, Amnesia does a lot of things about survival horror right. While it isn't a genre I play often, I do think it's perfectly suited to video games due to interactivity. Amnesia, possibly because it lacks the graphics budget of a AAA studio, goes back to survival horror's roots in early 3D gaming, which relied more on darkness and surprise than impressive and creepy enemy models because they simply couldn't be rendered. Amnesia's enemies look a little goofy when you stare at them for a while, but they'll still make you jump when you turn around to find one right behind you. I recommend it to anybody who's at all interested in the survival horror genre, even if you get scared. The triumvirate for beating Amnesia (only 2 required) is to play in daylight, with a friend, and/or without sound. Mix and match so that you can get through it, but I do recommend enjoying the sounds - they add a lot to the experience.
Posted by quixoticdreamer at 5:49 PM No comments:

I recently got a droid smartphone, and thus have been trying out all the great Android games that I never had a chance to play before. And all the mindless ones, like Temple Run and Fruit Ninja, but those are topics for another post. Or maybe just not topics ever, since well, there's not much to say about Temple Run and Fruit Ninja aside from "they're addictive". Today, as you may have gathered from the post title, I want to talk about Game Dev Story and Angry Birds Space, so let's get started with Game Dev Story. 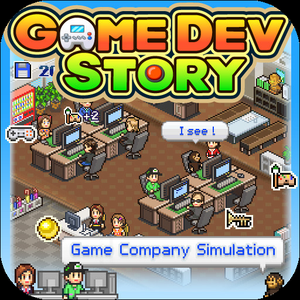 Game Dev Story places you in charge of a fledgling game development studio. You start the game by naming your studio, and then your secretary introduces you to the game. You need to hire a team, and then develop the best game ever. Fairly straightforward, but the path to the top is long and difficult. I'd go into more detail about what the process consists of, but it's somewhat long to explain and really quite simple to understand when you play, so I'm not going to. Pretty much: hire a team, work on a project, use research gained to level up team, use money earned to train team and start next project, repeat until success. Gameplay simply involves making the decisions in leading your studios along its path towards the top, and it's very addictive. You will always want to play through one more project, because this time you'll be able to pull off something even better. It's quite amazing how they managed to make the game so addictive despite not really having that much in the way of actual gameplay. In addition, if you have any desire to go into video game development at all, I think you should try out Game Dev Story. While it's not exactly a simulator for what working in game development is like, it might help you learn a few things. It definitely made me stop and think about my goals in life more than once. 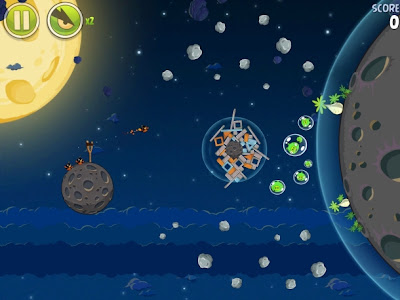 Next up, Angry Birds Space. It took Mario over two decades to make it to outer space, but the Angry Birds have done it in something like two years. I've played through a fair bit of the original Angry Birds, and it was quite addictive (achieving 3 stars on every level is a practically herculean task). However, I eventually got bored of it and moved on to other games. The premise for Angry Birds Space is the same: use a slingshot to hurl angry birds at pigs for massive damage. The only difference is that the slingshot is now in space. Some planets have gravity, in which case objects will be drawn towards the center of the circular gravity field, but otherwise launching a bird will send it straight ahead in that direction until it hits something. It may not sound very significant, but the space physics change the entire feel of the game for me. I wasn't expecting much out of Angry Birds Space, but honestly it blew me away within a few levels. You start with some basic launching birds into the right orbit trajectory to smash into the pigs, but it quickly escalates from there, until I was bombarding the pigs with asteroids that I blasted into the orbit fields. Nothing short of addictive, and this time I feel like I'm addicted more to the mechanics of the game than the need to 3 star everything (not that I haven't 3 starred all the levels I've played so far anyway). I definitely recommend you give this one a try as well, you might be as surprised as I was.

That's all for Silver Asterism smartphone edition this time! Next up, a rundown of my impressions of E3!
Posted by zagman505 at 2:32 AM No comments: