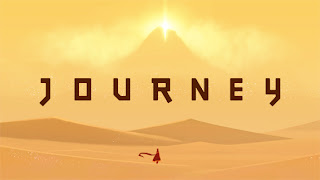 Made by thatgamecompany, the creators of Flower (which Maggie mentioned in her demo round-up), Journey is a bit more involved than the relaxed petal guiding that is Flower. You play as a traveler, making your way through a vast desert towards a glowing mountain far in the distance. The mechanics are simple: move towards the mountain with the left stick, look around with either the right stick or by tilting the controller. Shortly into your journey, you will discover a scarf that allows you to jump and fly as long as it is magically charged, and throughout the various levels you can collect golden fragments that extend the length of the your scarf (allowing you to jump and fly farther before running out of charge). Your character sings at the press of a button (holding the button has the character sing a louder note), which is the primary means of interacting with the world, and with other players. Environments are beautiful, and it's a ton of fun flying around when you have a longer scarf.

Speaking of other players, Journey's 'multiplayer' is among the most intriguing I've ever encountered. Though your journey is usually a lonely one, you can and will encounter other travelers along the way. There isn't much you can do in the way of interaction. The only way you can interact with the other players is through your character's singing, which replenishes your companion's scarf, to provide some incentive to sticking together and cooperating. However, it's hard to convey much of a message through the simple chimes your characters make, unless by some coincidence both you and your companion are fluent in Morse code. Despite this lack of ability to communicate, or perhaps because of it, I felt far closer to my companion in Journey than essentially anybody else I have interacted with in games or on the internet. In particular, I think my experience of the final chapter would have been significantly different (though I don't know that it would have been worse) had I not had a companion for almost the entire chapter. 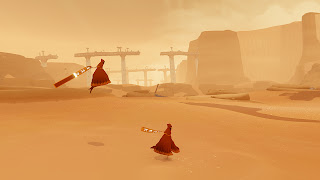 I don't have much else to say about Journey, so I'll end it here. In short, Journey is an extremely unique experience, the best words I can come up with to describe it are gorgeous and tranquil. I highly recommend it to anybody looking for something different.
Posted by zagman505 at 10:25 PM No comments:

Email ThisBlogThis!Share to TwitterShare to FacebookShare to Pinterest
Labels: journey

I haven't had much time to finish games recently, and I don't like to review them before they're done, so I've been a little quiet on here. Thanks to Jeremy though, I've been playing more demos than usual, so I thought I'd give my thoughts on a few of them. Some have come out and I haven't read full reviews, but I think the impression a demo gives is a very important thing. 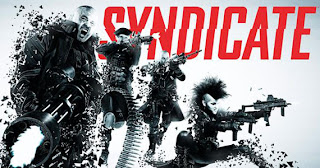 This futuristic first-person shooter tries to innovate a little with your ability to hack things, including your teammates, who you can heal or revive. While it didn't stand out to me as terribly special, and I'm rather ambivalent towards the whole FPS genre, it worked pretty well. I enjoyed the system, though I think you can hack things from a ridiculous distance. Jeremy and I played the co-op demo, which was designed for four people. Even on a low difficulty level it kicked our asses. I had fun doing it, but it steadily wore on me as we had to do the same part over and over and over. There are checkpoints, but again, they're designed for four players.

It makes sense from a design perspective to have levels designed for a certain number of players - it makes it easier to balance. But from what I can see, there aren't any for just two. And I suppose they mean for you to play online with random people or have more friends than I do, but that's not really my thing. So they lost me a bit there.

Will I buy it: No, not likely. Because FPS isn't my favorite genre, one really has to stand out for me to like it, and this one just didn't.

Here's another futuristic shooter that hasn't gotten a lot of hype. It takes place in a world where robots are created by two companies, one in Japan and one in the US, but both are forbidden from creating humanlike ones. One shows up, and you're sent in to investigate. So you shoot lots of robots. They boast a complex damage system where if you shoot a robot's leg, just the leg blows up and they limp along. That's all well and good, and it works well, but it strikes me that it's been done before. What really intrigued me was the promise of a comrade approval system, affected by everything from what you say to them to what you do on the battlefield. In turn, this affects whether they will take orders from you or not.

The demo, however, let me down. The buggy AI often couldn't figure out what to do, including taking cover beside me when I was leaving more than enough room. The combat system was never explained, and while it's related to standard FPS controls, that doesn't do me much good when I don't play them much. From the beginning, then, I felt shut out of the demo. My companions were nagging and annoying, and they disapproved the longer I sat in cover trying to figure out what to do. In particular, I was trying to figure out what I had that would be good against a riot shield. In the end, I tried a few failed charges and got so fed up with the system that I shut it off.

Will I buy it: No no no. The interesting premise falls flat in practice, and the demo alienated me from the start. (For the record, Jeremy was similarly annoyed, but managed to finish that second mission.) 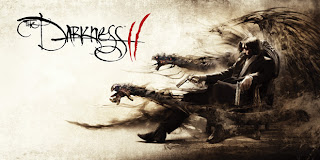 I've never played the Darkness, though I have a vague idea of what happens. You play as Jackie, who's a high-profile hit man in the mafia. For some reason, you've got a symbiotic relationship with this demon called the Darkness. Doesn't really matter - the point is that you're a badass. Jeremy convinced me to try out this demo, and while he had to get me past the more gruesome parts (such as watching yourself get nailed to a cross...), I really enjoyed it.

The combat was amazing. I've never shot a real gun before and am reasonably recent to shooting games, but the feel of the gun was perfect. I've never specifically noticed the design of shooting in a game before, but this stood out as very smooth. In addition to shooting, you can use your Darkness-fueled demonic arms to grab enemies and items as well as just lash at things. I impaled guys with parking meters and executed them by ripping out their hearts. So fighting is pretty gruesome, but awesome.

Will I buy it: Not sure. I got a little squeamish at some stuff, but on the other hand, you feel insanely powerful during combat. From what I've heard, they do some decent emotional storytelling too. I may give it a shot.

Oh man. I'm having such a love affair with Bioware right now. I just beat ME2 a couple weeks ago and finished up the Arrival DLC earlier this week. I adore the world that they've built and could (and probably will) babble on about the various alien races and the powers in combat and everything. Between that and the trailers with the tagline "Take Earth Back" I was more excited for Valentine's Day than ever before. Sadly, as a PS3 player, I had to wait to play the demo, but it was well worth it.

They've tweaked the health system, which was a little weird, but as I play more, I like it. The same combat system is back, and the Vanguard has a new power called Nova where you detonate your shield to cause area damage around you. Combined with Charge, it's the most fun I've had since they gave me a flamethrower. The story is quite compelling, as the game opens with the Reapers arriving at Earth. They then jump to a later mission where you are moving from checkpoint to checkpoint battling Cerberus agents with Liara and Garrus at your side. The new enemy types are lots of fun, including the intimidating Atlas mechs. And it's so pretty on the PS3.

A few interesting changes: They've removed the veteran level of difficulty, which is what I played the end of ME2 on. While it wasn't much of a step up from normal, I'm now stuck between cruising on normal and being frustrated by hardcore. It's a minor grudge, and I'll probably give hardcore a shot, but I found it a little odd. They've also added in two new modes: story and combat. In the former, combat is really easy so that players can make it from cutscene to cutscene with minimal dying. For the latter, all dialogue choices are made for you so that you can get back to killing things. I find this an interesting way to open the game up to new players by refocusing the core engagement, though I'm curious to see whether anyone uses them.

The multiplayer is where the demo has really shone for us. The three of us have spent hours playing it already along with another friend. I've been playing as an Engineer, and I never thought I'd leave Vanguard, but now I'm thinking of doing a new playthrough of ME2... Anyways, the two maps provided in the demo are a lot of fun. You get four characters per class, a human male and female and two aliens, either asari, salarian, turian, or quarian. The class shares experience points, so you can easily switch between the characters, who have slightly different sets of powers. As you complete objectives, you accrue credits which can be used to buy supply packs, which include med packs and other characters. 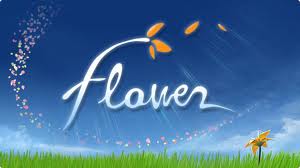 This was a fun little demo that Jeremy handed me when I was stressed out. It's gorgeous. Gameplay is very simple - you tilt the controller to guide your growing storm of petals over budded flowers to make them bloom and rejuvenate the surrounding area. It's a pleasant experience, if somewhat simplistic. And oh man is it pretty.

Will I buy it: Maybe. Simple, but pretty and relaxing. I may need that after all those shooters.
Posted by quixoticdreamer at 8:42 PM No comments: