The best thing about indie games on PSN is that they're shorter, which means that it doesn't take as long for me to get through one, and I also don't have to write as much about it. As indie games, they are often also more exciting or innovative, but me being as incredibly lazy as I am, the main draw is the shorter time commitment required. So on that note, next up is Warp, by Trapdoor. 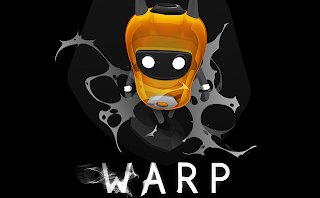 The premise of Warp is that you are an alien that has crashed on Earth. Incapacitated by the rough landing, you are captured, taken to a secret underwater facility, and experimented upon by scientists. However, you manage to break out using the titular ability, and proceed to wreak havoc throughout the facility in an attempt to break out a fellow alien and escape the facility. As you progress, you'll gain various other abilities that will help with your bid for freedom, such as being able to create an 'echo' of yourself that draws enemy attention. The levels are well designed, and the player can either aim to be stealthy or warp into enemies and tear them apart from the inside, and each method is generally equally viable. Following the main path tends to be fairly simple through the course of the game, but the levels have collectible grubs hidden or well placed throughout the level that require some more creative thinking to reach and obtain.

One of my favorite parts about Warp is the whimsical feel of the characters. Your character communicates through adorably unintelligible gargles, and acts like a curious small child when dealing with humans (even while gruesomely tearing apart their bodies). The scientists in the facility are total pansies, and upon sighting you will scream and run away, bemoaning their fate (and how they've had such an awful day) as they cower in a corner. On the other hand, the soldiers that patrol the facility are stereotypically gung-ho in their efforts to kill you, spouting macho lines about how you must have run away from them, you chicken. The extreme silliness that ensues whenever I revealed myself in a room was more than a little motivation to keep going even on the occasions that I got somewhat bored with the puzzles the game threw at me. 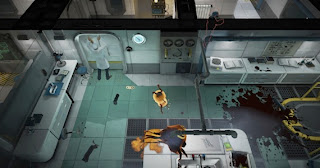 That's all for now! To sum things up, Warp is a short and fun stealth stealth'ish puzzle'ish game. Definitely give it a try if you like warping based puzzles, top down stealth games, or if you like warping into the bodies of enemies and tearing them apart from the inside out. Maybe next time I'll write about a bigger/longer game.
Posted by zagman505 at 6:44 PM No comments: