Haven't posted in a little while, but I'm still doing better than October! And now I have plenty more things to write about, by which I actually mean I have maybe three more games to write about. So first up is Batman: Arkham City.

Arkham City is the sequel to Batman: Arkham Asylum, and shifts the focus of the game to a more open world. In Arkham Asylum, inmates have taken over the asylum and Batman goes in to sort things out. Arkham City takes place several months later, and Mayor Quincy Sharp has sectioned off a portion of Gotham City to become the new Arkham Asylum. Bruce Wayne is campaigning against Arkham City when he is arrested and thrown into the asylum. Bruce Wayne becomes Batman, and sets out to take out the super-villains causing trouble in Arkham City, and to stop the dastardly plans of the new warden of the asylum, Hugo Strange. The story is still linear, but now there are more sidequests, and a much wider area for collectibles to be hidden in.

The story of Arkham City is interesting, with a very large mix of Batman villains getting caught up in the mix. However, though many villains show up, a lot of the appearances are very brief, and it frequently feels like the villain was included for the sake of inclusion. In particular, I feel like Two-Face was rather heavily featured in the advertisements, but only shows up at the very beginning, after which he apparently disappears. He does return in the Catwoman content, but only once at the very end, and in an entirely unsatisfying way. As a second 'however', though, each villain's character is portrayed amazingly, even with the short screen-time given. And as a second 'in particular', Penguin very quickly left me feeling disgusted at his sadism, while the battle with Ra's al Ghul is extremely cinematic. I don't feel like the campaign is particularly long (but then, I am currently in the middle of playing Skyrim), but there is a scattering of sidequests available, many of them featuring villains from Arkham Asylum. 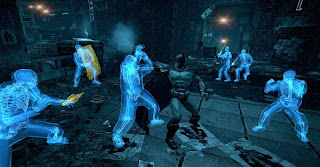 As for gameplay, Arkham City takes what Arkham Asylum does well and adds more to it. Fighting flows beautifully when you're in hand to hand combat, and it feels amazing to rack up immense combos while fighting off hordes of enemies. Multiple enemies can be countered simultaneously now, making larger groups of enemies more manageable. A couple new types of enemies have been added, such as ones carrying sharp weapons, ones with body armor, and ones with riot shields, to force the player to mix things up even more. Most of Batman's gadgets can now be used on the fly with a simple button combination, allowing a much greater variety in combo possibilities, which makes the overall combat system much deeper and considerably more difficult to master. It is entirely possible to get through the game by mashing mostly the attack and counter buttons, but to do it stylishly and still avoid taking lots of damage takes a lot of work and feels immensely satisfying.

The stealth sections also have added several new elements to the mix. Enemies in these sections also come in more varieties now. Infrared goggles allow thugs to scan a vantage point to see if Batman is hiding there, some thugs will place mines that only detonate when triggered by Batman, and some even have signal jammers that prevent the absolutely crucial detective vision from functioning properly. As a stealth game fan, I personally loved every single one of these segments, and honestly I think that they don't happen enough in the game. While thugs with guns do appear more frequently on the overworld near the end of the game, taking out a group of thugs with guns while outside feels significantly different from taking out a group of them while inside a building. Because of this, I feel like the focus of the game shifted more towards hand to hand combat than stealth, while I remember Arkham Asylum as a more equal blend of both. 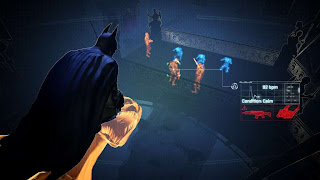 And finally, the replay value. Arkham City is absolutely immense, and there are hundreds of Riddler challenges to complete, scattered all over the world. Riddler trophies can require quite a range of gadgets to acquire (those that Batman can't yet acquire can be tagged and marked on the map), and some are only available for Catwoman to collect. To help with obtaining every single collectible, Riddler informants are randomly thrown in with groups of thugs. If Batman can take out every other thug before the informant, he can then interrogate the informant to discover the locations of a few Riddler challenges. After beating the game, a New Game Plus mode is unlocked, which puts Batman at the start of the game with all upgrades and gadgets intact. Thugs come in larger and more complicated combinations, and the counter icon that appears over an enemy's head disappears. And finally, there are challenge maps, where the player can pick one of the characters (Batman, Catwoman, Robin, and Nightwing) to take on waves of unarmed enemies (earning points for performance and medals for reaching point thresholds), or clear a room of armed enemies (earning medals for taking out a thug in a particular way). Basically, you can play Arkham City for as long as you could possibly want.

So in case you couldn't tell yet, Batman: Arkham City is an amazing game. The story is exciting and the characters are interesting. The hand to hand fighting is fluid and the stealth gameplay makes you really feel like a predator stalking the darkness. And there is more than enough content to keep you playing for weeks. There are some flaws, but it does so much more right, which makes Arkham City possibly the greatest comic book game yet created.
Posted by zagman505 at 3:30 AM No comments:

As a foreword: This post is about pure rhythm games, and not so much about games with rhythm elements - which I should be writing about in the near future. "Near".
Alright, that's it. I'm finally accepting it. I am a rhythm game player.
I've held my fair share of anti-rhythm snobbiness in the past, internalizing the view that rhythm games are lesser games on account of being focused on a single gameplay feature.
When you want to make "press buttons in time with the music" more difficult, you generally just add more buttons and faster music. Contrast this with the variety of action puzzle genres (puzzle platformers and shooters for the most part), which add complexity by throwing in unexpected game elements - the added difficulty is in figuring out how to accomplish the new tasks. Rhythm games don't generally stray too far from the "higher levels, faster music!" formula. Even heavily gameplay-focused games and genres can still have unexpected or unforeseen complexities - skill platformers like Super Meat Boy and their ilk tend to have an overbearing complexity. Even though you're still essentially pressing buttons rapidly at the right times, it seems like their complexity involves more mental skill - you have to figure out how to best your obstacles, rather than simply reading off the list.
On the other hand, all the lauded first person shooters - which I do, indeed, love - are frequently just as simple. I don't generally find myself scratching my head over how to approach a room in Shooter McKillygame 5, I just let the instinctive part of me take over and manage the issue. That's how I lose time playing games. It's definitely more fun when a game has mental difficulty as well as physical or instinctive difficulty, but it's rather rare, in my experience. The only thing rhythm games lack in comparison to other more "serious" genres is a well-integrated story... But if you start arguing that the majority of "serious" games - I'm looking at you, f-three-ar, I'm looking at you, Mario, and I'm looking at you, every racing game ever made - can stand solely on the their storytelling, then you may need your head examined. I'm not saying that those games have bottom-of-the-well storytelling, but that's not what makes them fun.
But let's think about that for a moment - why don't rhythm games have as well-integrated a story as many other genres? When you get down to it, the problem is somewhat inherent in the genre - there's only so much that you can do to tell a story in an interesting, interactive way, when the gameplay is so rigidly structured. It might be interesting to see more rhythm games built around operatic works or ballads - something telling a story. Even then, though, the player never makes a choice - the music can always just continue playing if they fail. The other option, to make the musical gameplay entirely separate from the story (see career modes in every Guitar Band style game) just makes it worse. Then you lose out entirely on the integration effects that make video games a compelling medium in the first place.
In the end, I think that all this snobbery over game genres is rather silly. Games should be judged on their own merit - for all that you might argue that rhythm games have no depth, I will bet good money that I can make a shallower RPG-esque game than Dance Dance Revolution. You're free, of course, to have personal preferences - but when you start claiming that RPGs are an inherently stronger storytelling and experience-crafting medium, you've tipped over the line.

There. I gave you a picture. Happy?
Posted by Shoofle at 8:40 PM No comments:

The Humble Bundle is a great idea. Indie game devs allow buyers to pay any price for their games, and the revenues are split between the devs and not-for-profit organizations (I'm not sure if this changes with each bundle, but the current bundle donates to the Child's Play charity, and the Electronic Frontier Foundation) however the buyer wants. Money gets donated to some good causes, gamers get some neat indie games for typically less than they usually sell for, and while the devs probably don't make as much of a profit, they definitely benefit from their time in the spotlight. So, long story short, you should go buy the humble bundle!

Before I get into my impressions of the games, I should probably mention what games are even part of the bundle. The bundle this time consists of three games. No matter what, when you purchase the bundle, you will receive the alpha version of Voxatron. If you pay over whatever the current bundle average is (around $5 last time I checked), then you will also receive the games Blocks That Matter and The Binding of Isaac, both of which are also available on Steam for $5 each. There is no DRM, so you can install these games anywhere you want as often as you want, and all three games are cross platform, so you can get it regardless of whether you're running Windows, Mac, or Linux. There's even an option to get Blocks That Matter and The Binding of Isaac added to your Steam account. Now, onto the actual games!

Email ThisBlogThis!Share to TwitterShare to FacebookShare to Pinterest
Labels: blocks that matter, humble bundle, impressions, the binding of isaac, voxatron

Only one post in all of October? I was really hoping to do better than that... Also, just a note, I've gone and edited past posts so that the entire article isn't visible on the main page, figured it made everything a bit cleaner. Unfortunately, not all of the posts were very easy to split up, so some of the splits might be a bit ugly, and I apologize for that.
Since the last post got me thinking a lot more about DoubleFine, I figured I might as well also talk a bit more about Psychonauts, because omgPsychonautsisamazingspaz. Anyway, on to the review thing!